Flight of the Valkyrie: the Viking figurine that’s heading for Britain 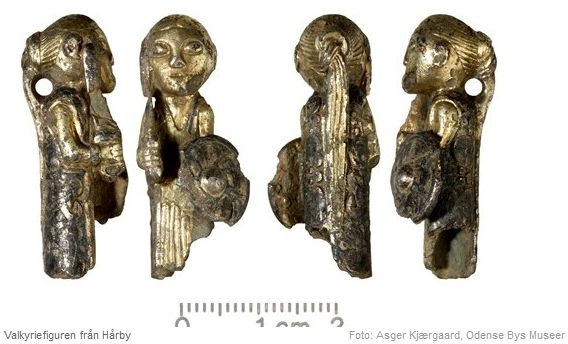 “There can hardly be any doubt that the figure depicts one of Odin’s Valkyries as we know them from the sagas as well as from Swedish picture stones from the time around AD700,”

This article titled “Flight of the Valkyrie: the Viking figurine that’s heading for Britain” was written by Maev Kennedy, for guardian.co.uk on Monday 4th March 2013 15.31 UTC

A little face peering up from a clod of frozen mud in Denmark has proved to be a unique find: the only known 3D Viking representation of a Valkyrie.

The figurine, believed to date from about AD800, was found in December and has gone straight from conservation to display in the National Museum in Copenhagen. It will then be included in the exhibition on the Viking age that opens there in June and at the British Museum in 2014.

The legends of the Valkyries – the ominous companions of the god Odin who descend on battlefields to choose which warriors will die – have been among the most enduring in Scandinavian folklore and literature. Later images, often inspired by Wagner’s music, tend to be romantic creatures with flowing locks and voluptuous bodies.

The thumb-sized figurine is made of gilded silver, with some black niello inlay decoration. The Valkyrie is sturdily dressed, armed with a double-sided Viking sword and a round shield, her hair neatly twisted into a long ponytail forming a loop, suggesting it may have been worn as a pendant.

Small, flat images of striding women, believed to represent Valkyrie, have been found on many Danish Viking sites, but nothing like this figurine. Its survival is something of a miracle: the lower legs and feet are missing, and it was found among fragments of scrap metal, so somebody may have started to chop it up to be melted down to extract its silver content.

Mogens Bo Henriksen, an archaeologist and curator at the Odense city museum, on Funen island near the find site, described the figurine as “unique” and said: “There can hardly be any doubt that the figure depicts one of Odin’s Valkyries as we know them from the sagas as well as from Swedish picture stones from the time around AD700,” he said.

The figurine was found at the end of December by Morten Skovsby, who was learning how to use a metal detector with three amateur archaeologists near the village of Hårby.

Henriksen hopes that after the figurine’s travels – during which it will be displayed near the largest Viking ship ever found – it will return to be exhibited in Odense.