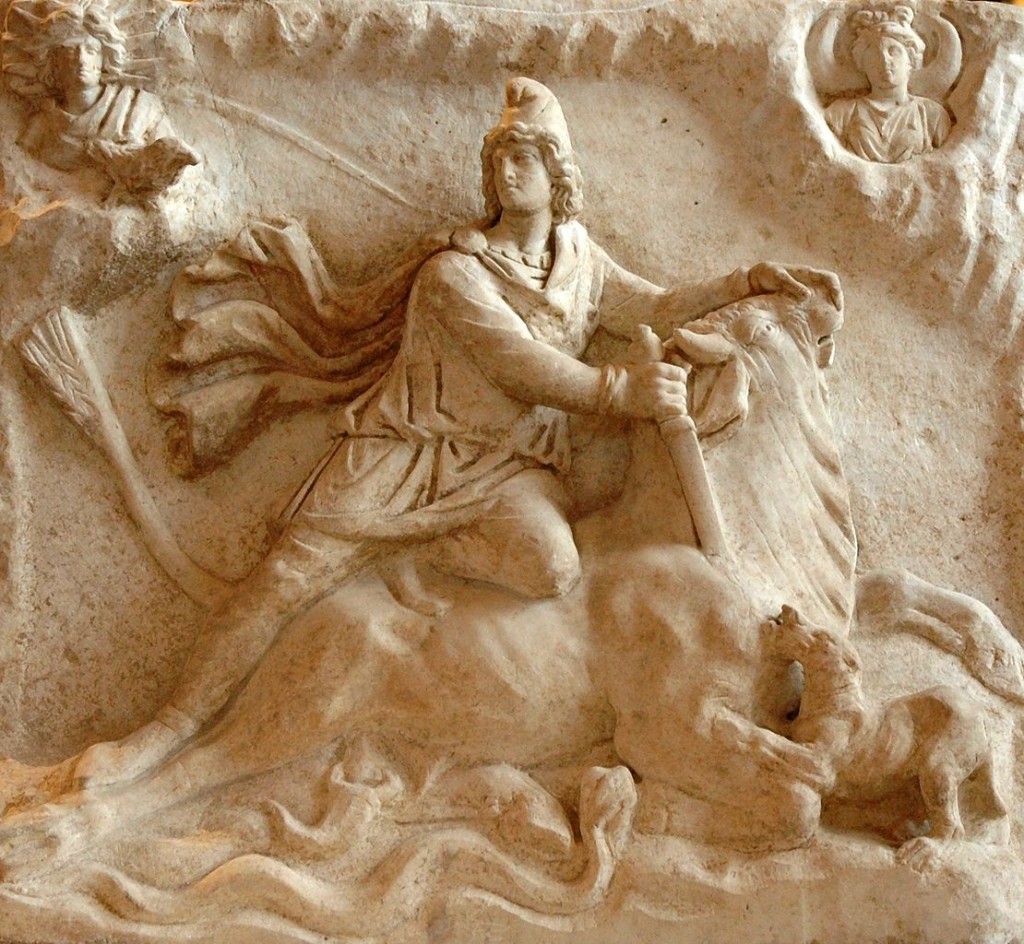 This article titled “Temple of Mithras comes home” was written by Maev Kennedy, for The Guardian on Thursday 19th January 2012 13.27 UTC

The temple was also about to become Britain’s most mobile Roman site. Fifty-seven years ago it was in the way of an office block development and was dismantled and moved to the street level roof of a car park, part of the huge Bucklersbury House development. Now it is on the move again, back to the banks of the long vanished Wallbrook stream, to make way for the headquarters of Bloomberg.

In 1954, it was front-page news day after day, attracted half-mile queues and was watched across the nation on Movietone news. Its fate was anxiously discussed at cabinet meetings and watched with close interest by the prime minister, Winston Churchill.

Mithras was a virile young god whose cult spread across the Roman empire from the east and was particularly beloved of soldiers. He was worshipped in cavelike, partly underground spaces where initiates gradually learned of his mysteries in the torchlit darkness.

“The old Temple of Mithras still attracts so much attention. It is such a strange thing,” said archaeologist John Shepherd. “For some reason, which I just can’t quite put my finger on, it has become quite a landmark. I do wonder whether it was so important in the Roman period – but that is another story.”

The furore surrounding the temple led to new guidance on how to treat archaeological remains, and ultimately to the principle that the developer who wants to get his or her hands on a site pays for the archaeology.

Mithras is about to cost a second company dear: Legal & General had to pay in 1954, and now it is the turn of Bloomberg LP, which has demolished the ugly Bucklersbury House to build a vast new a new Lord Foster-designed European HQ. This winter the Temple of Mithras is being dismantled by a team from the Museum of London, and will be rebuilt on its original site 90 metres away.

To their amazement, the archaeologists have also uncovered the original foundations, thought to have been bulldozed to dust in 1954. This time scrupulous care is being taken to record every surviving detail, and get the reconstruction right.Shepherd, who has traced the story through cabinet papers and company records, says the whole affair terrified developers: “A generation after the occasion there were still some in the building industry who would shudder at the mention of the temple.” Newspaper cartoons depicted foremen threatening to fine workmen who found anything Roman.

In 1954, two months of recording the details of a puzzling Roman site thought to be a small villa or a warehouse had just ended. The diggers were waiting to start work on the office block and the archaeologists were tidying up and preparing to go to the pub – and then the head was found.

The site in Wallbrook Street in the heart of the City was close to the hub of the newspaper world in Fleet Street, and there happened to be a photographer hanging around. The image of the smooth-faced, handsome young god appeared in the Sunday Times and by that afternoon the fragile ruins were swarming with sightseers: one photograph shows a smartly dressed woman fiercely jabbing her umbrella into the stones. By Monday such a row had erupted over its fate that the then minister for works, Sir David Eccles, was ordered to the site by Churchill.

The archaeologists, mainly students led by WF Grimes, the director of the Museum of London, won an extension and major finds followed, including more splendid carvings. The site opened to the public for two hours each evening, and police had to be called in to control the crowds.

The affair was raised at three cabinet meetings but the Tory government refused to pay the huge cost of changing the new building to preserve the temple, which would have lost an estimated seven floors of office space. Eventually a compromise was reached whereby Legal & General would pay to have the remains rebuilt in a more convenient place.

When the reconstruction opened eight years later, it was hailed as a triumph, but the archaeologists knew that was far from true. The beautiful carvings went to the museum, but the other stones were dumped in a churchyard without being properly recorded or numbered, then moved to a builder’s yard. When the time came to put the temple back together again – without any archaeologists involved – some of the stone was missing completely, though the builders assured they could locate extra Kentish ragstone to fill any gaps.

The temple originally had a sunken nave flanked by seven symbolic pairs of pillars leading to the altar, a ritual well and raised seating on either side. It was rebuilt all on one level. A structure where worshippers were gradually initiated into mysteries through darkness and fire lay exposed to the elements on top of a car park. And a wild decision was taken to fill in the floor with crazy paving, giving it the appearance of a suburban back garden feature.

Grimes commented sadly: “My suggestions were completely ignored … The result is virtually meaningless as a reconstruction of a mithraeum.”

The current site director, Sophie Jackson, said: “The only bit of the entire building that we can be absolutely certain is both original and in the right place is the doorstep.” She pointed to the stone slab hollowed by centuries of sandalled feet, and the superbly preserved iron sockets on which the original timber doors hinged.

In 1962, the stones were put together with such hard cement that separating them is now wearing out 10 expensive diamond-tipped cutters a day. Each stone is then carefully cleaned by hand and scrupulously recorded before being put into storage. The temple will be rebuilt in its original home on the banks of what was the Walbrook river, partly underground and dramatically lit, where crowds will undoubtedly come to gape once again at the most moved ruins in Britain.