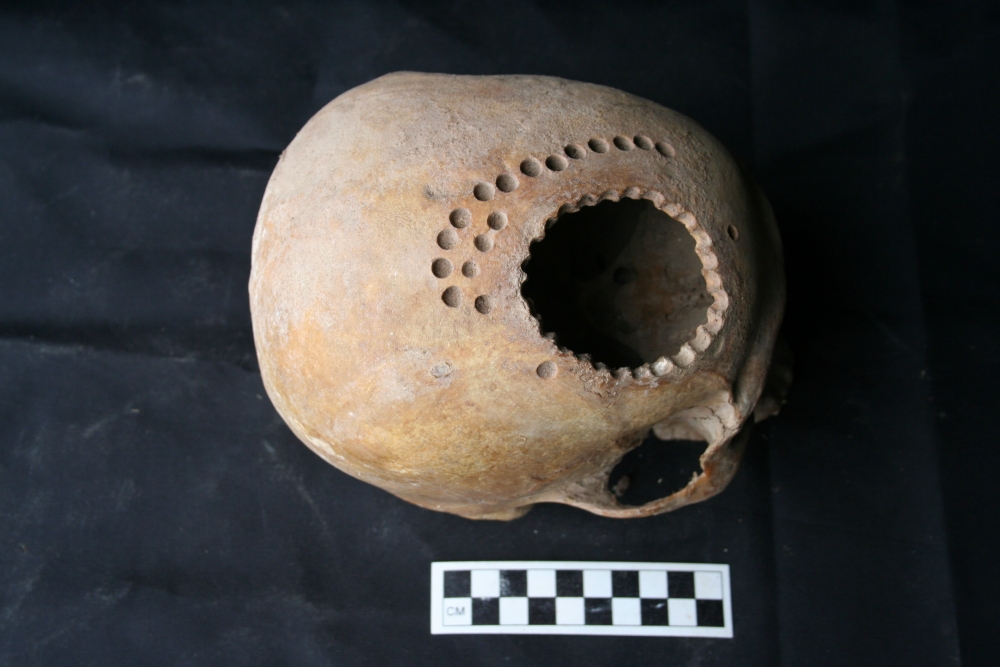 Cranial surgery is tricky business, even under 21st-century conditions (think aseptic environment, specialized surgical instruments and copious amounts of pain medication both during and afterward).

However, evidence shows that healers in Peru practiced trepanation — a surgical procedure that involves removing a section of the cranial vault using a hand drill or a scraping tool — more than 1,000 years ago to treat a variety of ailments, from head injuries to heartsickness. And they did so without the benefit of the aforementioned medical advances.

Excavating burial caves in the south-central Andean province of Andahuaylas in Peru, UC Santa Barbara bioarchaeologist Danielle Kurin and her research team unearthed the remains of 32 individuals that date back to the Late Intermediate Period (ca. AD 1000-1250). Among them, 45 separate trepanation procedures were in evidence. Kurin’s findings appear in the current issue of the American Journal of Physical Anthropology.

“When you get a knock on the head that causes your brain to swell dangerously, or you have some kind of neurological, spiritual or psychosomatic illness, drilling a hole in the head becomes a reasonable thing to do,” said Kurin, a visiting assistant professor in the Department of Anthropology at UCSB and a specialist in forensic anthropology.

According to Kurin, trepanations first appeared in the south-central Andean highlands during the Early Intermediate Period (ca. AD 200-600), although the technique was not universally practiced. Still, it was considered a viable medical procedure until the Spanish put the kibosh on the practice in the early 16th century.

But Kurin wanted to know how trepanation came to exist in the first place. And she looked to a failed empire to find some answers.

“For about 400 years, from 600 to 1000 AD, the area where I work — the Andahuaylas — was living as a prosperous province within an enigmatic empire known as the Wari,” she said. “For reasons still unknown, the empire suddenly collapsed.” And the collapse of civilization, she noted, brings a lot of problems.

“But it is precisely during times of collapse that we see people’s resilience and moxie coming to the fore,” Kurin continued. “In the same way that new types of bullet wounds from the Civil War resulted in the development of better glass eyes, the same way IED’s are propelling research in prosthetics in the military today, so, too, did these people in Peru employ trepanation to cope with new challenges like violence, disease and depravation 1,000 years ago.”

Kurin’s research shows various cutting practices and techniques being employed by practitioners around the same time. Some used scraping, others used cutting and still others made use of a hand drill. “It looks like they were trying different techniques, the same way we might try new medical procedures today,” she said. “They’re experimenting with different ways of cutting into the skull.”

Sometimes they were successful and the patient recovered, and sometimes things didn’t go so well. “We can tell a trepanation is healed because we see these finger-like projections of bone that are growing,” Kurin explained. “We have several cases where someone suffered a head fracture and were treated with the surgery; in many cases, both the original wound and the trepanation healed.” It could take several years for the bone to regrow, and in a subset of those, a trepanation hole in the patient’s head might remain for the rest of his life, thereby conferring upon him a new “survivor” identity.

When a patient didn’t survive, his skull (almost never hers, as the practice of trepanation on women and children was forbidden in this region) might have been donated to science, so to speak, and used for education purposes. “The idea with this surgery is to go all the way through the bone, but not touch the brain,” said Kurin. “That takes incredible skill and practice.

“As bioarchaeologists, we can tell that they’re experimenting on recently dead bodies because we can measure the location and depths of the holes they’re drilling,” she continued. “In one example, each hole is drilled a little deeper than the last. So you can imagine a guy in his prehistoric Peruvian medical school practicing with his hand drill to know how many times he needs to turn it to nimbly and accurately penetrate the thickness of a skull.”

Some might consider drilling a hole in someone’s head a form of torture, but Kurin doesn’t perceive it as such. “We can see where the trepanations are. We can see that they’re shaving the hair. We see the black smudge of an herbal remedy they put over the wound,” she noted. “To me, those are signs that the intention was to save the life of the sick or injured individual.”

The remains Kurin excavated from the caves in Andahuaylas comprise perhaps the largest well-contextualized collection in the world. Most of the trepanned crania already studied reside in museums such as the Smithsonian Institution, the Field Museum of Natural History or the Hearst Museum of Anthropology. “Most were collected by archaeologists a century ago and so we don’t have good contextual information,” she said.

But thanks to Kurin’s careful archaeological excavation of intact tombs and methodical analysis of the human skeletons and mummies buried therein, she knows exactly where, when and how the remains she found were buried, as well as who and what was buried with them. She used radiocarbon dating and insect casings to determine how long the bodies were left out before they skeletonized or were mummified, and multi-isotopic testing to reconstruct what they ate and where they were born. “That gives us a lot more information,” she said.

“These ancient people can’t speak to us directly, but they do give us information that allows us to reconstruct some aspect of their lives and their deaths and even what happened after they died,” she continued. “Importantly, we shouldn’t look at a state of collapse as the beginning of a ‘dark age,’ but rather view it as an era that breeds resilience and foments stunning innovation within the population.”

The Core Question of Pseudoarchaeology: "What is the Goal of Archaeological Research?"
YouTube Video UCiJCpRC9BvG-xIlYImiNN0g_iMwYP0jdQ_I

Manawydan, Rhiannon and the Enchantment of Dyfed! (Third Branch of the Mabinogion)
YouTube Video UCiJCpRC9BvG-xIlYImiNN0g_qbdcgGD91Cg

Who Would YOU Exile? Ancient Greece & Being OSTRACIZED!
YouTube Video UCiJCpRC9BvG-xIlYImiNN0g_IRmgjWwc_Ns