Durham prisoner of war camp to be saved 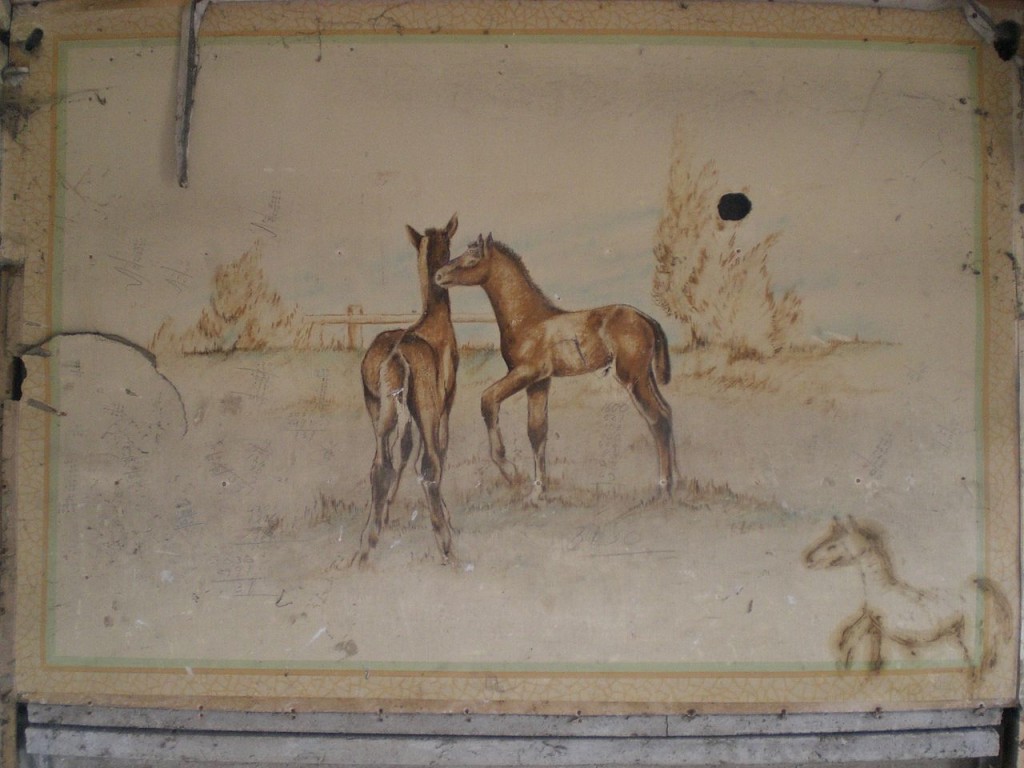 A £500,000-rescue has been launched to save the battered remains of a canteen and theatre covered with nostalgic scenes by homesick German prisoners.

This article titled “Durham prisoner of war camp to be saved” was written by Maev Kennedy, for The Guardian on Thursday 29th December 2011 20.23 UTC

A £500,000-rescue has been launched to save the battered remains of a canteen and theatre covered with nostalgic scenes by homesick German prisoners.

They form part of Harperley prisoner of war camp in Durham, the only camp to have scheduled monument status which puts it on a par with Stonehenge.

English Heritage is investing £500,000 on emergency repairs without requiring any matching funding from the private owners, a rare move for the cash-strapped organisation, reflecting the unique importance of the site.

The decision on whether to save the site, or record it and abandon it to nature, became urgent in last year’s bitter winter, when winds howled around the forests sketched on buckling sheets of scavenged hardboard, and snow drifting through holes in the roof piled up around the hoofs of the painted stags.

The huts were only intended to last a few years, lashed up out of prefabricated concrete and asbestos panels in 1943, first to house low risk Italian and later German prisoners shipped back from the campaign in Africa.

The prisoners underwent “de-Nazification” classes but were never regarded as a security risk, and were confined only by a wire fence, guarded by men living in marginally better huts separated only by a grass strip from their own. Only one prisoner ever bothered to abscond.

They were sent to work for local farmers, and organised entertainments and classes, carved wooden toys sold as Christmas presents – still cherished in many local families – published newspapers and magazines, and decorated their canteen and theatre with romantic landscapes from their homeland.

By the time the war ended many had married and settled down – including Reinhard Nieke, whose daughter Margaret now works for Natural England, the government body responsible for the countryside.

“He was only 19 when he was conscripted and sent to France. He came from Silesia, but when he went back after the war my grandmother had escaped to Bavaria with all her possessions on a horse and cart, so there was no home to go back to.

“He returned to the farm he had worked for, and became part of the family when he married my mother Mary.

“Visiting the camp was a very strange experience – one of the rare occasions when I felt a shiver down my spine.”

Rob Young, historic environment adviser at English Heritage, who was also brought up nearby said:

“I was never inside it when I was young – it was owned by a local farmer and the buildings were used as chicken sheds and farm stores – but everyone in the area was very well aware of its history.

“Many people ask why not just record it and let it fall down, but it is the only place where you can see this aspect of our history, and it has a very powerful atmosphere. Although the materials were very crude, whatever they could get hold of, the workmanship is excellent, and the theatre was planned by somebody who really knew his job – it has a miniature proscenium arch, an orchestra pit, raked seating, even a prompt box, all fitted into the framework of the hut.”

Although there were 47 buildings on the site, many now derelict but with original fittings which survive nowhere else, the priority is to protect the two most important with their unique decoration.

Temporary sheds are being built enclosing the decaying buildings, while painting conservators tackle the peeling walls. Ultimately the plan – designed by the conservation architect Ptolemy Dean, presenter of the BBC Restoration challenge where Harperley made the semi-finals in 2003 – is to clad them in timber to protect the original structures.

The camp was put up for sale on eBay two years ago when James and Lisa McLeod, who had planned to restore it as a visitor attraction, ran out of money. It failed to sell, and the hope is that it will now be taken on by a charitable trust to reopen the whole 12 acres as a tourist attraction.

Simon Thurley, chief executive of English Heritage, said Harperley was a survivor from one of the most important periods in recent British history, and as such of national importance. “The site is a testament to our wartime past and must be preserved.”