Exciting new discoveries and opportunities at the Culver Archaeological Project

During early 2011 David Staveley conducted a magnetometer survey in a large field at Bridge Farm, Wellingham, Nr Lewes (TQ43301440) on behalf of the Culver Archaeological Project (CAP). He was looking for the Roman London to Lewes road that Ivan Margary had suggested ran down the east side of the Ouse at this point (Margary  1948, p.150-1). The initial results were so outstanding and unexpected that the survey was extended over the next 2 years as a clear picture of a substantial Roman settlement in a bend of the River Ouse emerged from the geophysical images. The location is just across the river from Culver Farm where a Roman road and industrial workings have been discovered just to the north east of the Barcombe villa and bathhouse complex.  The settlement pattern is apparently interrupted by a double ditched enclosure suggesting more than one phase of activity on the site. In the magnetometer images the enclosure appears to overlay the settlement but the chronology was not conclusive and the CAP directors, Rob Wallace and David Millum, agreed that this was one of the main questions to be resolved when planning the subsequent excavations for July and August 2013. The later surveys revealed radiating roads heading to the north, east and west, with smaller trackways and boundaries indicated by ditches in the area surrounding the main settlement (Fig.1).

The interpretation of the buried features as Roman was supported by the Roman pottery and tile collected by systematic field walking in early 2011. Then in late 2012 David Cunningham, a local metal detectorist who had collected an assemblage of finds from the site over several years, was introduced to CAP by Robin Hodgkinson of the Independent Historical Research Group. This extensive collection ratified the longevity of the settlement as it included various coins from the Republican era right through to Gratian in the late 4th century AD (Fig.2). Whilst it is likely that the worn nature of these republican coins indicate use in the 1st to 2nd century AD (David Rudling pers. comm.) rather than when they were minted, the coin sequence still indicates a 300 year time span. In early December 2012 CAP organised a thorough and systematic metal detecting survey by the Eastbourne, West Kent and Ringmer groups, who found a further 15 Roman coins mainly dating from the 3rd century AD. Over the next few months the full results of this survey and Mr Cunningham’s collection will be scrutinised and fully recorded. 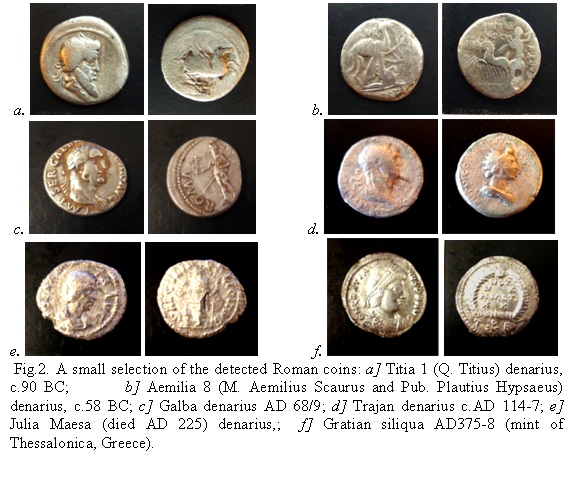 Further exciting news was received in October when the project was awarded a substantial grant of £90,900 from the Heritage Lottery Fund which has enabled a comprehensive programme of surveys and excavations to be planned for 2013, with a strong focus on the involvement of the local community including nearby schools. The main excavation has been set for a six week period from 1st July to 10th August 2013, to be open seven days a week to encourage the widest possible participation. Participation in the fieldwork is free with camp site with shower and toilet facilities being offered at £50 Monday to Friday and £20 Friday -Sunday.  Further details will be posted on the project’s website, www.culverproject.co.uk.

Acknowledgements: David Staveley for the use of his magnetometer survey image and for his expertise and perseverance over many months of data collection; David Cunningham for access to his artefact collection; David Rudling for his identification and dating of the coins; and to Mark Stroude for allowing CAP continued access to his land.

Who Would YOU Exile? Ancient Greece & Being OSTRACIZED!
YouTube Video UCiJCpRC9BvG-xIlYImiNN0g_IRmgjWwc_Ns