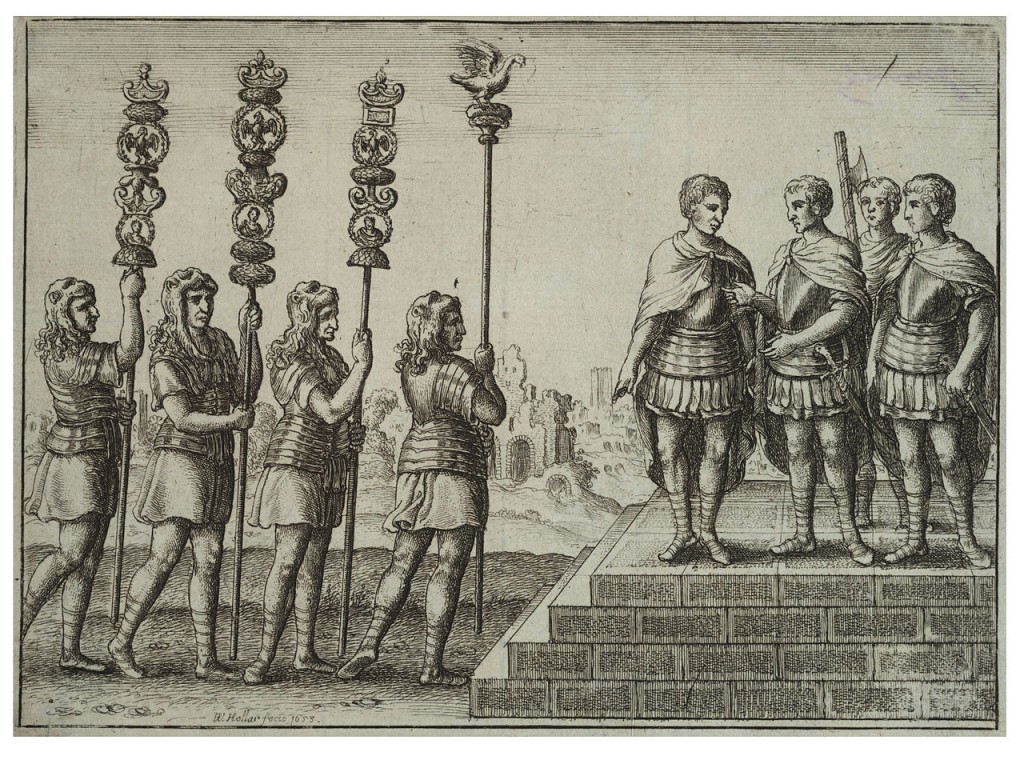 A silver-gilt Roman cavalry helmet of international importance has been pieced together at the British Museum, from thousands of fragments of corroded metal lifted in a block of mud from a Leicestershire hillside more than 10 years ago.

This article titled “Unique Roman cavalry helmet pieced together 10 years after discovery” was written by Maev Kennedy, for The Guardian on Tuesday 10th January 2012 15.19 UTC

A silver-gilt Roman cavalry helmet of international importance has been pieced together at the British Museum, from thousands of fragments of corroded metal lifted in a block of mud from a Leicestershire hillside more than 10 years ago.

The work has occupied a team of conservators for years. The arguments about the mystery of such a high status object – possibly buried in the year of the Roman invasion of Britain, together with a mass of Roman and British coins and guarded by three dead dogs – will last much longer.

Even after thousands of hours of work by conservator Marilyn Hockey and her team, the metal is too badly corroded to recover its original glitter. Although it is a unique find in Britain because most of the thin silver-gilt plating survives, and an exceptionally early example from anywhere in the Roman empire, the Hallaton helmet will never be as seductively beautiful as the Crosby Garrett helmet, excavated in Cumbria and controversially auctioned for £2m at Christies in 2010.

However, although valued at £300,000, it is far more valuable to archaeologists, with every scrap of context evidence scrupulously recovered and recorded.

“The Crosby Garrett is just a pretty toy compared to this; this is the real treasure,” J D Hill, an Iron Age expert at the British Museum, said.

The original owner would have shone in the sun like a god when he appeared on horseback wearing the helmet, of elaborately decorated silver over an iron core. Such objects were costly pieces of swagger never intended for practical use, but often given as rewards for exceptional service – in this case a gift of imperial quality.

The intriguing possibility is that the owner may have been a member of the local tribe, the Corieltauvi, who left to fight in the imperial armies on the continent – and since the helmet was buried around AD 43, he may have returned as part of the Roman invasion of Britain, eventually coming home to make a stupendous offering to his native gods.

If that is true, his own people must have taken a dim view of the decoration, which includes a Roman emperor trampling a cowering barbarian under his horse’s hoofs.

Other experts believe the helmet was traded, given as a reward for Corieltauvi submission to the invaders – or, as the finder believes, looted from the original owner, who is unlikely to have readily surrendered his most precious possession.

It was when Ken Wallace, a retired teacher and member of a local field archaeology group, saw a lifesize silver human ear in the mud in 2001, that he knew an already astonishing hoard had yielded up something extraordinary.

He and other amateur archaeologists from the Hallaton Fieldwork Group found some pieces of Roman pottery on a low hill outside their village in 2000. Wallace returned with his metal detector, and started turning up coins – at which point he heroically stopped digging and called in the experts, including archaeologists from the British Museum and Leicester university.

The site is now believed a major British hilltop ritual enclosure, protected by an east-facing ditch.

The unearthed treasure was, in Wallace’s words, “jaw-dropping”. It included one of the largest hoards of Iron Age coins, more than 5,000 pieces of Roman and British gold and silver – including the oldest Roman coin ever found in Britain, a heavily worn pre-imperial denarius minted in 250 BC.

There was also the earliest British-made silver bowl ever found, a magnificent British tankard handle, and thousands of meat bones, evidence of feasts of sucking pig. There were also three more poignant skeletons, the labrador-sized dogs buried on guard for eternity.

The helmet was found the following year, lifted from the ground in one hefty block of soil encased in plaster of paris, and brought to the British Museum as part of the treasure valuation for the whole hoard.

When Hockey first peered into the mud, she feared it would never be possible to restore the shattered metal as a three-dimensional object. Leicestershire county council managed to raise almost £1m, with major grants from the Heritage Lottery Fund, the Art Fund and other trusts and charities, to buy the entire hoard and pay for the conservation work.

As the soil block was gently prised apart, it proved to hold coins, bone fragments, the crown of the helmet and myriad fragments some almost too small to see with the naked eye, and stacked up like spare collars, a puzzling total of seven cheek pieces.

The helmet will go on display at the end of this month at Harborough Museum, in a specially created new gallery which already holds many objects from the hoard just nine miles from where it was found.

“I can hardly believe my eyes when I look at the helmet today,” Wallace said. “I last saw it six months ago, and it was still in a thousand pieces. Gobsmacked, is the only word for it.”